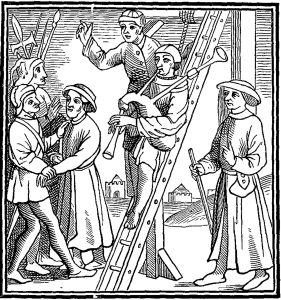 Most children are taught in school that modern policing in England started with the Bow Street Runners in London. The author Henry Fielding founded the Runners in 1749; they were unique as they were attached to the Bow Street magistrates’ office and paid from central government funds. Throughout history however the signs of the often rigid enforcement of the law have been visually evident. During the Roman occupation of Britain you would almost certainly have seen crucifixions or perhaps witnessed ad bestias (“to the beasts”) at the amphitheatre, where criminals were forced to face wild animals without the benefit of weapon or armour. Throughout post-Roman Britain and into the Middle Ages you would have seen gallows at crossroads with decomposing naked bodies swinging from the ropes. The putrefied heads of traitors would greet you as you approached the city gates. Every village would have stocks to punish petty offenders and rogue traders would often find themselves in the pillories. END_OF_DOCUMENT_TOKEN_TO_BE_REPLACED