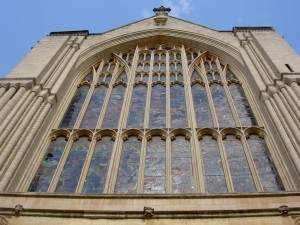 I was unsure where to start with my first slice of history. This is not only my first blog post on MySliceOfHistory.com but my first ever blog post! After much cogitation I decided to take inspiration from Welsh poet Dylan Thomas; “To begin at the beginning”, and where better to start ‘my slice of history’ than the start of history itself.

You might be thinking that pinpointing the creation of Heaven and Earth would be difficult but in 1658 James Ussher, Bishop of Armagh in Ireland did just that. Ussher estimated that “the beginning” occurred at nightfall on Saturday, October 22 4,004 years before the Nativity of Jesus. Of course current theory suggests the Earth is 4.54 billion years old and the Universe 13.75 billion years old, but before the 18th century when geological research began to suggest otherwise, the best information the majority of the Christian and Jewish world had was the Bible. The Hebrew Bible (or Christian Old Testament) measures the passage of time through biblical history from the Creation until the kingdoms of Israel and Judah through various “begats”, reign-periods, and other means.

Ussher used this biblical genealogy and cross-checked it against astronomical cycles and what was known of Middle Eastern and Egyptian history. It’s also worth noting the extraordinary life spans of some of the patriarchs. Perhaps the best known is the genealogical link between Adam and Noah whose name has now become synonymous with extended life; Methuselah who lived to the ripe old age of 969! “And all the days of Methuselah were nine hundred sixty and nine years” (Genesis 5:27). Ussher made several assumptions; he assumed that when night and day were created they would have been equal in length, which pinpointed the date as being near the equinox. Ussher also assumed that it would have been harvest time in the Garden of Eden so the world’s first inhabitants Adam and Eve would have something to eat.

Ussher’s Chronology became notorious as it was included in the margins of the King James translation of the bible from the early 18th Century until the mid-20th Century! Of course Ussher was not the only scholar make such a calculation. A few years before Ussher’s Chronology, John Lighfoot who was Vice Chancellor of Cambridge University estimated that Heaven and Earth came into being in September 3929 B.C.E. Martin Luther, Johannes Kepler and even the Venerable Bede had also used complicated methods to arrive at similar conclusions but Ussher’s date of creation became the most universally accepted.

3 thoughts on “To Begin at The Beginning”